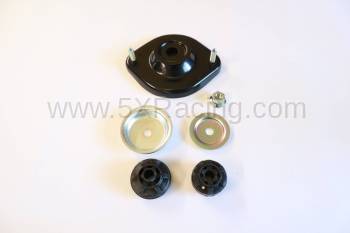 Consisting of all Genuine Mazda OEM parts, the kit includes:

The 1999-2005 NB Miata is an improvement over the 1990-97 NA in several ways. Mazda improved the suspension with a redesign of the upper mounts, springs and shocks. This gives improved noise and vibration isolation from NVH (noise/vibration/harshness from road noise). For those with 1990-1997 Miatas, these parts will bolt right into the older chassis.

This conversion kit includes everything you need to install a set of NB shocks and springs into your NA Miata, just add your choice of 1999-2005 OEM Miata replacement shocks (such as Bilstein or Koni). We also offer two add-on options: OEM flange nuts for the shock (correct size and coating so they won't rust). These are M10 sized and will not work with Koni shocks. We also have the add-on option of a set of our 5X Racing 58mm Red Bump Stops. These are OEM upgrades and will provide a far superior bump stop to replace the soft and short-lived OEM bump stops.

Be aware that the NB springs are a bit taller than the NA springs, and therefore it might raise your ride height. This might be desirable for those who want more ride height for rally or off road driving, or want more shock options than what the NA offerings provide.

The kit will not work with NA shocks because of the different shaft design of the NA shock. The shank where the shock threads are is much longer on the NB than the NA, and the thick rubber bushings in this kit will not compress flat enough to allow thread engagement.