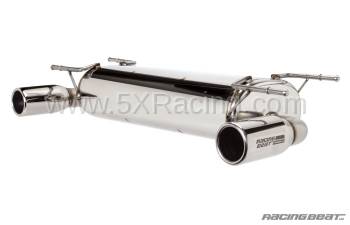 A simple and reasonable upgrade to the MX-5 exhaust system is the replacement of the muffler section with an aftermarket unit. Our testing has shown that Mazda's engineers did a very good job with the performance tuning of their muffler unit and squeezing any significant power gains through the use of an aftermarket exhaust is difficult. The Racing Beat team developed several different straight-through mufflers, chambered mufflers, and baffled mufflers in an attempt to optimize power gains, while moderating the "boomy" tones that prevailed under deceleration. We are confident the final system that we now offer has met these objectives and delivers an outstanding combination of quality sound, appearance, and performance. We designed our muffler to appeal to MX-5 owners that drive their cars on a daily-basis and prefer a more mature, modest exhaust tone? yet will provide an aggressive "attitude" when you jump on the throttle!

Easy-to-install, this 304-stainless steel system features dual 3.5" OD tips and can be bolted to the car in minutes using the supplied hardware. The muffler is "cat-back" emissions legal and meets all California sound level requirements. This Racing Beat component is backed by our 1-Year Limited Warranty.

MX-5 NC - A new era begins
With the introduction of the MX-5 in 2006, many aftermarket exhaust manufacturers quickly set-out to produce an exhaust system. What everyone quickly discovered was that the 2.0-liter engine in the MX-5 produced an exhaust level that was much different than the tone on the earlier engines! Early attempts at using components that were originally designed for these earlier engines were simply not up to the task of taming the rather unruly and loud tone of the exhaust of this engine.

The MX-5 exhaust tone displayed characteristics very much unlike what we had observed on earlier applications. Our findings during early prototype testing revealed the following:

1. Upon lifting the throttle after hard acceleration, the engine produced a significant amount of exhaust noise during deceleration.
2. Low speed, low-to-medium RPM driving in 1st or 2nd gear through a parking lot produced a very pronounced "off throttle" exhaust note.

So, the challenge was to design a series of exhaust components for the MX-5 that improved exhaust gas flow, provided a comfortable and reasonable exhaust tone, improved performance, and looked great.