Buyer Beware! There are replica kits out there that imitate this authentic kit which use incorrect materials and roughly cut off-the-shelf bump stops. There is only one legal bump stop kit for Spec Miata racing as per the SCCA and NASA rules (see rules notation below), and it's this one. These authentic Fat Cat Motorsports kits we offer to you here are manufactured by us with license from Fat Cat Motorsports. They use strictly controlled proprietary components licensed to be manufactured only for us, and were designed together to work as a system. We supply Mazdaspeed Motorsports with these kits and they are the ONLY legal shock mount/bump stop kit for Spec Miata.

NOTE! The Fat Cat Kits do not come with instructions. We have them available for download here in our Tech Center, or in the Documents tab below.

This kit is the legal rules specified in the SCCA GCR and NASA CCR. This is the ONLY kit specified by the rules, and don't be fooled by a Fat Cat "style" or "FC Style Bushings Kit" that you might see for cheaper out there.

This kit is an all new shock mount and bumpstop system for ALL 1990-2005 Mazda Miata's equipped with 90-97 Bilstein HD shocks (as in Spec Miata). The kit is designed to work in conjunction with 1999-2005 Miata shock hats and will NOT work with 1990-1997 Miata shock hats as they're an entirely different design. If you do not already have 1999-2005 shock hats, please add them to the order by using the "Customize Your Item" dropdown menu. The kit provides everything you'll need to install specially designed and calibrated bumpstops, including hardware. For an idea on how the kit goes together, please read the instruction manual as listed above.

Spec Miata rules change every year, and with the allowance of the 1999+ Miata shock hats in 2008, a fitment issue with the Mazdaspeed bumpstops became apparent and the need to correct it was solved with allowing this Fat Cat Motorsports bump stop kit. This kit works with the 99+ shock hats and creates more shock travel, and uses a superior bump stop material for better suspension compliance. This kit includes everything you will need to upgrade and replace the Mazdaspeed bump stops on your existing Spec Miata suspension kit. If you are building a new kit from scratch and do not have 99+ Miata shock hats, you will need to purchase four (4) 99+ Miata shock hats available right here at 5X Racing in addition to your Fat Cat Kit. This kit will not work with 1990-1997 Miata shock hats. 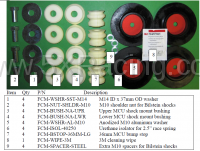